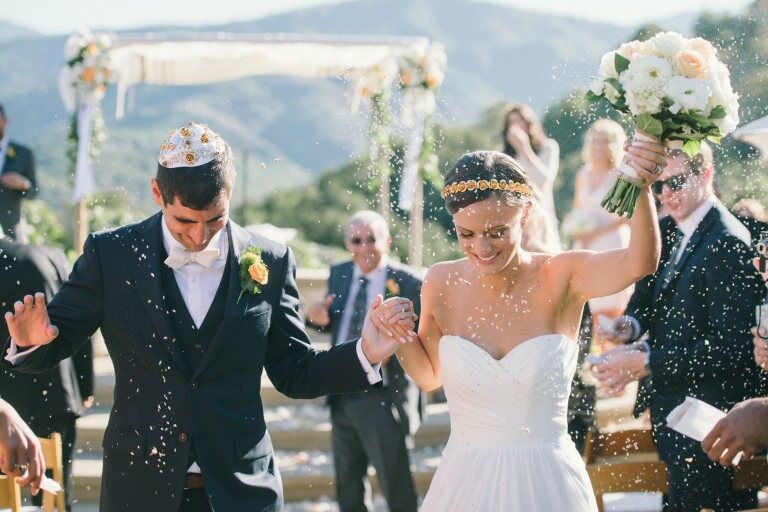 Have you ever wondered what’s the most beautiful thing about weddings under the aegis of various religions? Well, we have a simple answer for you in case you have. The thing is, these rituals that have the same, beautiful and simple meaning are experienced in so many different ways. It doesn’t matter if you believe in Buda, Allah, Yahweh, Jesus or any other God incarnation through history. They all celebrate one kind of love but intertwined with the special and beautiful rituals and traditions of their own people.

Each community has its own unique meaningfulness, and each is equally important to every member of a delight, celebrating family. Jews are considered to be one of the nations that organize unforgettable, interesting and rather cheerful weddings. So this time, we decided to take a closer look at the details and reveal to you how they celebrate a new stage in their love and family life.

This time we’re going to speak about some of the most recognizable customs at weddings of Jewish couples. You’ll definitely recognize some of them – they may even exist in your countries, even if you aren’t Jewish, or they may be everywhere.

You’ll also find out about some of them for the first time by reading these lines. But one thing is for sure – you’ll definitely enrich your knowledge of traditions around the world and the wonderful symbolism of the happiest day in their lives.

First of all – according to an old custom, the wedding date should be set, whenever possible, within the growing lunar cycle, when the moon grows. They say it symbolizes the desire to increase the happiness and fortune of the new couple, just as the moon grows in the sky. So sweet, right? However, even if they don’t manage to arrange the ceremony like this,  they’re able to organize the event any day of the week, except on Jewish holiday days. For example, during the Sabbath, from sunset on Friday until sunset on Saturday, as it’s well known that it’s Jewish holy day.

On the eve of the marriage ceremony, the bride’s supposed to take a so-called ritual purification bath, named mikveh. She immerses completely in water in order to get rid of all sins and impurities before she starts a new life with her beloved one. Sounds familiar? Yes – quite similar to Christian baptism, and it even has the same meaning.

This should be done with water that comes from a natural source, as in ancient times, these dives were made in streams, rivers or in the sea. However, nowadays it all went more practical –  there are tiny pools supplied with water, specially made for this type of custom. This process is so strict that the girl must take off even her jewelry –  she mustn’t wear any nail polish or have any similar additional details on!

The newlyweds aren’t allowed to see each other seven days before the wedding. The Halacha, compilation of the main Jewish laws, provides that extreme excitement may cause intimate bleeding or other symptoms of stress to the bride. And, as this could prevent the celebration, it’s not permitted to meet the fiance during the week before the special day. But this isn’t the only reason – Jews believe that this will also increase the expectation and give bigger excitement to the event. We must agree – it makes sense.

On the wedding day

Although the whole world sees Jewish as extremely religious people, they’re actually not allowed to marry religiously before they marry in the town hall. And believe it or not, it’s exactly what Talmud says – that the law of the state is the first law to respect.

The religious ceremony takes place in the synagogue and under a nuptial canopy, known as jupá. This symbolizes the new family roof, referring to the houses where the Jews once lived. There’s the rabbi, who, in the first place, invites the groom to join him; then the relatives and, lastly, the bride. In some Jewish communities, the bride circles the groom several times, creating an invisible wall, into which she enters after that, excluding all others. That’s the way to show that he’s hers only for the rest of their lives.

The bride, or her family, must give talit to the future husband, a fringed mantle that symbolizes protection an “aura” of protection that the bride gives to the groom. Men also wear kippah, or yamaka – a special kind of little hat and one of the most recognizable accessories related to Jewish ever. Here, on this site, it’s possible to see many different models – they’re always lovely designed and represent nice additional details to this special moment.

The rabbi must fill a glass of wine that the future spouses will share before the husband puts a gold ring on the index finger of his wife’s right hand. The bride then does the same, as a symbol of their union and love. The exchange of rings symbolizes giving and receiving within the sacred meaning of marriage.

After the exchange of rings, the reading of the ketubá, the marriage certificate announcing the husband’s obligations to the woman, is carried out – aloud. This document, in addition to being signed by the couple, must be signed by two witnesses, who mustn’t have any type of blood relationship with them. This agreement lists the main obligations that the husband has towards his wife. Once the document is signed, the spouses are covered by a mantle, under which they spend some moments listening to the rest of the remaining prayers and the seven blessings that will protect them in their marital life.

One of the most famous rituals is glass breaking, traditionally performed by the groom.  Then the groom steps on a glass cup with his foot – to remember the destruction of the Sacred Temple in Jerusalem. This reminds everyone that despite living through happy moments, in marriage you also go through difficult times in which you mustn’t lose faith. All guests shout those legendary two words: Mazel Tov! And this is officially the end of the ceremony.

The newlyweds have an opportunity to be alone doing the ritual known as yihud, union, in which they go alone to a private room and take together a typical consomme, thus cutting off the fast. When they feel ready, then they go to the reception and the banquet and celebration begins. After the wedding ceremony, the bride takes part in a traditional Mitzvah dance. She stands completely still while the rabbi and family members dance in front of her. It’s considered a great honor to entertain a newlywed bride and dance in front of her – and this makes all guests jump out of their seats!

As you were able to see, the Jewish wedding is a tapestry woven with many threads – biblical, historical and mystical – that goes back more than a few hundred years ago. Judaism is one of the oldest religions and, despite the time, they keep preserving their traditions – and this is exactly what makes their customs and special occasions worth being widely known.