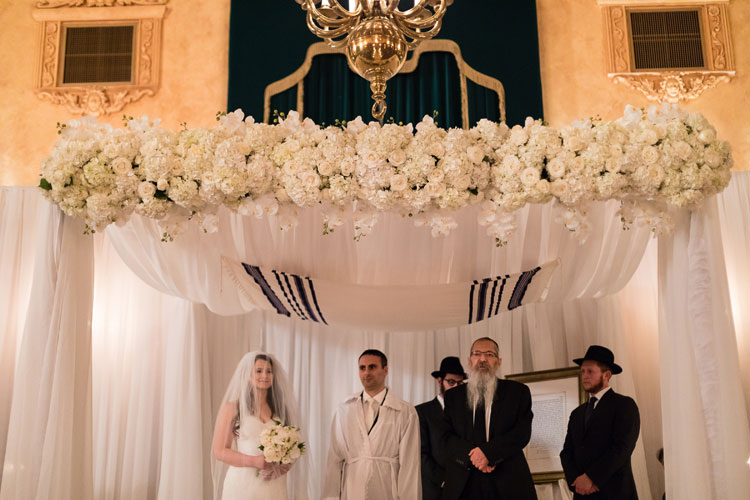 The most important day in the life of young Jewish couples is a bit of a mystery for people outside the Jew community. One fact still remains – that the wedding day is special for the couple, but for their families as well.

Those butterflies in the stomach, questions, dilemmas, expectations, the nerves before the ceremony starts, invested efforts, time, and energy in the organization are all forgotten at the end of the wedding. It is better to be prepared for a typical Jewish wedding, and you can start with reading this article.

Cultural heritage and tradition have a big part to play in Jewish weddings throughout centuries and the same applies today. Obviously, the known past obstacles that the members of the Jewish population endured during the time in various countries increases the importance of the ceremony itself.

In the 1800s in Germany-Bavaria, the law was strict around Jewish marriage conditions. One of them explicitly demanded written confirmation of the death of a member of their society for another to get married. Today we can speak with pride and admiration for a traditional Jewish wedding.

We have done the homework and prepared some interesting facts you must know before attending the ceremony to understand their meaning entirely.

If you have an upcoming invitation to a Jewish wedding for the first time, pay attention. These pieces of information will help you have an even more profound understanding of traditional Jew ceremonies. The ketubah is the act of signing of a traditional Jewish prenuptial agreement, present in the Jewish civil law, actually.

For this marriage contract to be valid, it is signed just before the ceremony of the wedding in the presence of two witnesses, rabbi, and close friends and family.  Remember that the ketubah is always read and a part of the wedding afterward. Don’t be surprised if you hear it more than once. The groom outlines his responsibilities in the marriage, along with all the rights and conditions the bride can expect.

Another traditional part of the wedding itself is Fasting. This represents the redemption symbolically for any sins that the couple might have before the wedding. As a token of their repentance, the couple opts to fast on the day of the wedding. But after the ceremony ends, so those the ritual of Fasting.

Uniquely special and a small part of something that means more to all people present at the wedding. See the couple together endure the most minor and the most significant tests in front of them, is a sign of long and stable marriage.

Next on our list of information to help you get ready for a traditional Jewish wedding is Bedeken. Similarly to the previously mentioned, this one also takes place before the wedding ceremony.

Bedeken is symbolically attached to the story from the Bible, in which Jacob marries the sister of the girl he is in love with, only because she was veiled.

The Bedeken ceremony looks quite impressive when you attend it for the first time. Male friends of the groom are on one side as moral support, while the bride is sitting on a throne with her female friends by her side. When the groom puts the veil on the head of the bride, the ritual is complete, with everybody dancing in a delightful atmosphere. You can bring a nice pair of Havdalah candles for this occasion as they are perfect for it and you can see more here.

Perhaps you have seen in movies or heard that on such occasions people are required to dress accordingly, right? The cultural and traditional heritage implies that all mail guests have a kippah (small round white caps) on their heads as a sign of respect during the ceremony.

You don’t have to purchase a kippah, they will be provided at the wedding. In some Jewish communities, women also wear a kippah on the wedding day. Still, usually, they cover their hair on the ceremony as a sign of respect also (married women), while other girls at the wedding don’t have kippahs on their heads.

Chuppah represents a future home symbolically for the couple. It has a roof, and four corners usually made out of tallit’s into a bigger canopy, which is held up by the closest friend or family. If you are asked to be one of the persons holding up the Chuppah, know it is a great honor.

Tradition calls for the parents of the groom and the bride to take them separately to the Chuppah, leaving them under it like in their home to start a new family on their own. Many choices of the groom, bride, along with their families, dictate how the Chuppah can be arranged with flowers and in various colors. The complete picture under the Chuppah, where the two families join in one, is really one of a kind sight. This is my personal favorite part of the wedding.

This a must-witness moment in Jewish weddings once in your life. Tradition implies that Circling is a symbolic ritual when the bride circles around the groom three or seven times before they step under the Chuppah. The complete procedure is understood as preventive protection from bad luck, evil spirits, and other women that may test the will of the groom (Circling – the wall of protection). Today to present equality in the marriage, the groom also circles around the bride.

Probably the most known part of a Jewish wedding all over the world is the breaking of the glass in the end. There are many different theories that the glass represents the fall of the Temple in Jerusalem, historically bringing to life the hard life in front of them. Some people believe as a traditional and historically present act, it brings good luck to the couple.

The glass is put in a cloth bag before the groom steps on it. The married couple takes the pieces of the broken glass in a cloth bag, as a talisman into any house they opt to live in.